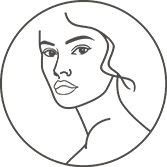 • The skin around your eyes and lips is more delicate and requires targeted care to deal with its own specific needs.

• The delicate eye area is the first to show tell-tale signs of fatigue and ageing, and the lips are often neglected in our routines

• Our expert dermatologists use special treatments to ensure that your eyes and lips look bright, radiant and flawless. Dark Circles is a very common worldwide problem affecting all ages and gender. For most people with this condition it is a major aesthetic concern as it makes one look stressed, ill, or older. It is difficult to treat primarily because it has multiple and diverse factors as the cause. Also known as periorbital hypermelanosis, it is a little more common in people of colour. The causes are:

Genetic- Often seen to be passed down from mother to daughter.

Post inflammatory Hyperpigmentation- In atopic dermatitis and allergic contact dermatitis the skin under the eyes is chronically irritated and the friction caused by constant rubbing creates the dark patches.

Sub Cutaneous Vascularity- An increased number of thin capillaries under the eye area shows up as darker areas due to the pigment contained in the blood.

Shadowing due to skin laxity.

Under-eye bags is the puffiness or swelling that is sometimes seen under the eyes, as one gets older. The swelling could be due to fluid (water) or it could be due to fat. Essentially the cause is due to the loss of elasticity in the tissue around the eyes creating a potential pouch for the accumulation of the fat or fluid. When an otherwise healthy younger person presents with this condition, it is safe to assume that it probably runs in the family or there is a poor sleep history attached. A sudden acute puffiness with itching and redness could be due to some dermatitis or allergy and would require a different approach to treatment.

The fan-shaped lines formed at the corner of your eyes when you smile are called crows feet. Some people start showing these lines at a younger age, due to overuse of the muscles involved. And for others, it may start with ageing.

At AAYNA, we offer various customized treatment options ranging from radiofrequency, lasers, eye patches to botox which is lasting and highly effective.

These are frequently a sign of aging or in some cases may be due to various underlying medical causes. At AAYNA, we have devised a proper evaluation and management protocol for such cases which includes radiofrequency treatments, lasers, botox or even fillers.

Droopy and/or thin lips, give one a sad or depressed look. This is a concern across age-groups and could be hereditary or a result of the aging process . While in younger patients, correction required is more specific; for older patients, assessment of other factors such as sagging cheeks and regressing jawline is also done. Our team of skilled doctors draft a treatment plan that can range from botox, fillers, radiofrequency or a combination of these to address these concern.

Lip color depends on various factors, but most commonly on genetics. However, dark lips in an individual who otherwise had a healthy shade could be due to various reasons such as smoking, sun damage, medications, stress or medical conditions. Depending on the severity, treatments are planned using lasers, peels, and also semi-permanent make up (or SPMU). Disclaimer: Results may vary depending on the individual & multiple factors including age, gender, skin type, condition, other products used, health history, environment and lifestyle. All images used on the website are for illustrative purposes only.